Statement by the UN Resident Coordinator, Ms. Helena Fraser on the Speech by the President of Uzbekistan at the 75th session of the United Nations General Assembly

I commend President Mirziyoyev’s clear assessment of global and regional challenges, and welcome his concrete proposals and initiatives to address them.

On behalf of the UN Country Team in Uzbekistan, I would like to express my appreciation of the President’s speech at the 75th Session of the United Nations General Assembly in New York.

I commend President Mirziyoyev’s clear assessment of global and regional challenges, and welcome his concrete proposals and initiatives to address them. 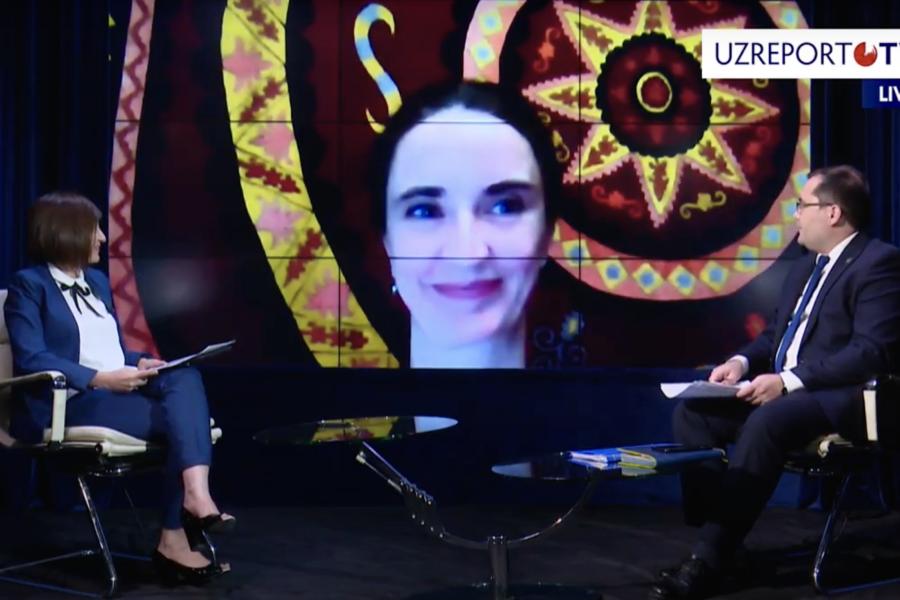 The President tabled a number of new proposals, while others were already familiar, such as the Convention on Youth Rights and the proposal for a special General Assembly resolution the on the Aral Sea.

The speech clearly reflected Uzbekistan’s increasing role as a regional leader in many areas, including in supporting peace and socio-economic development in Afghanistan, in promoting regional cooperation for transport and connectivity, in tackling climate change and counter-terrorism.

I also welcome the special emphasis given in the speech to gender equality and women’s participation.

I took careful note of the President’s proposal for a special resolution of the General Assembly on parliaments’ role in advancing the Sustainable Development Goals and human rights.

It is indeed true that parliamentarians can – and must – play a vital role in adopting laws compliant with SDG commitments and human rights obligations. They also play an extremely significant part in monitoring the effective implementation of UN human rights bodies’ recommendations and of national SDG targets in areas as diverse as anti-corruption, environmental protection, labour rights, disability inclusion. Parliaments can also play a leading role in facilitating inclusive dialogue between state institutions and civil society.

The President’s proposal is significant because Uzbekistan’s Parliament has developed important experience in advancing sustainable development and human rights in recent years. Specifically, I welcome the increasing oversight exercised by the Oliy Majlis on important international commitments, including through the national Commission on human trafficking, the Commission on gender equality, and the bicameral Commission on SDGs. This latter Commission exists to scrutinize Government agencies’ implementation of formal national SDG targets, and also reviewed Uzbekistan’s first Voluntary National Review on this topic, which was presented at the UN High-Level Political Forum in July this year.

The Oliy Majlis is also playing an important role in analyzing draft legislation, and in this connection I welcome the increasing engagement of international experts in parliamentary hearings in Uzbekistan. Such experts can provide important insights on alignment to human rights obligations.

The UN Country Team, including among others UNDP, UNICEF, UNDP, ILO, UNODC, OHCHR, WHO and UNESCO, is already working actively with the Oliy Majlis in to promote further engagement on the SDGs and on human rights, and we look forward to supporting Uzbekistan to share this experience on the global stage.

In closing, let me note that this year’s General Assembly is a historic occasion. It is 75 years since the Organisation was founded to ‘save succeeding generations from the scourge of war’. And this General Assembly is happening at a time when the world is facing unprecedented threats from several sources – geo-strategic tensions, the climate crisis, and now the COVID-19 pandemic. These challenges transcend borders, and only through global solidarity and multilateral approaches can they be effectively addressed.

It is therefore a very positive sign that the President of the Republic of Uzbekistan referenced his strong support for the United Nations and for multilateralism in his statement to the General Assembly.

I am happy to note that the people of Uzbekistan have also voiced such support! Earlier this year, the UN Secretary-General launched a global conversation, the “UN75” campaign, to ensure the UN uses the occasion of the jubilee year to listen to and learn from the voices of the people we serve.

The UN75 survey reached more than a million people around the world, with a special focus on the voices of youth. It’s a testament to Uzbekistan’s strong commitment to the UN, that over 34,000 people from Uzbekistan have so far joined this conversation – placing us in the top ten survey responding countries! Moreover, with support from the Oliy Majlis, over 33 UN75 dialogues were conducted across the country, with around 3,000 people from all walks of life, from Parliamentarians to the most disadvantaged.

All these people shared their fears and hopes for the future, and one common thread unites their feedback: international cooperation is vital to deal with today’s challenges.

Now, more than ever, multilateralism matters.