I am delighted to be here in Uzbekistan, the “Cradle of Sciences and Islamic Thought”.

As I stand here today, I can feel the spirit of al-Bukhari and al-Tirmidhi, who played a leading role in the development of Hadith, the sayings of Prophet Mohammed. 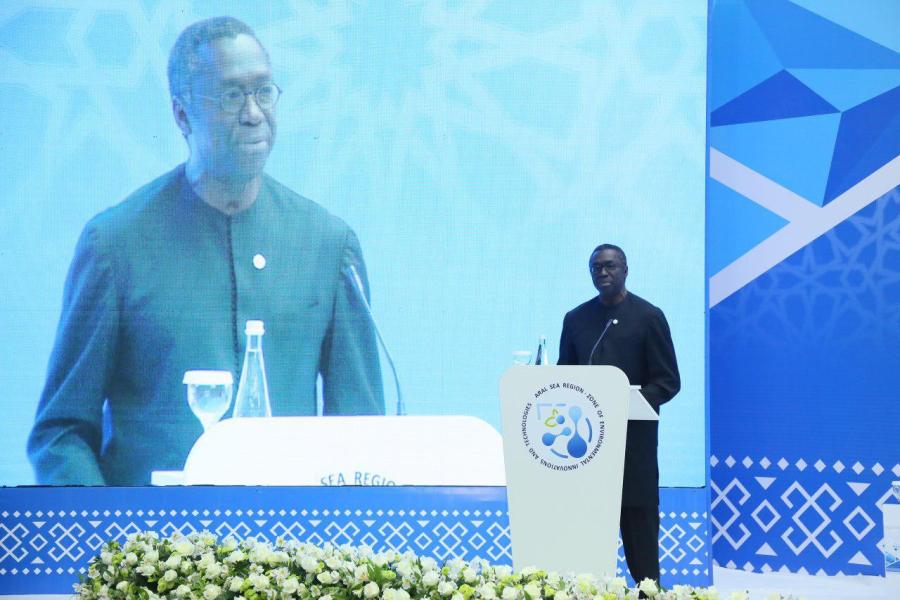 As I stand here today, I can sense the wisdom of Abu al-Mu'in al-Nasafi and Abū Manṣūr al-Māturīdī, who were major figures in Kalam, “the science of the word”

As I stand here today, I can feel the inspiration of Omar Khayyam, Abu Ali Ibn Sina, Muḥammad ibn Mūsā al-Khwārizmī, Abu Nasr Farabi and Ulugh Bey who were leading scientists and precursors in philosophy, cosmology mathematics and astronomy.

No wonder then that Uzbekistan fully deserves its prestigious label of “Symbol of the Magic East”!

I am thrilled to see that this conference on the Aral Sea is being held here in of Nukus, the city custodian of the “Forbidden Art”.  I am deeply convinced that our Conference will be guided and inspired by the enchantment of this place.

It is promising to see the renewed emphasis placed by the Government of Uzbekistan on the Aral Sea region.  And this features prominently in the country’s development strategy by 2035.

An important component of the 2030 Agenda for Sustainable Development is the central principle to leave no one behind – in this respect, the people of Karakalpakstan will play a pivotal role in Uzbekistan’s continuing development.

This commitment from the Government is reflected in what we saw at Muynak yesterday -- large investments have already been initiated.

Major afforestation and land restoration programmes are underway on and around the dried seabed to minimize health hazards; dust storms; and to prevent land degradation.

A system of small lakes is being developed through investments in dams to partly restore the ecological and hydrological systems -- and increase water availability in the region.

By next year, the Government of Uzbekistan is keen to move towards a Resolution that can be adopted at the UN General Assembly to re-invigorate the international community to promote sustainable development in the Aral Sea.

A Multi-partner Trust Fund of the United Nations focused on ‘human security’ has been operational since 2017 -- with funding from the UN partners, Government of Uzbekistan, Norway and soon the European Union.

The idea is to work with governments to identify new approaches to tackle old challenges.

This principle is very much embodied in the concept of making the Aral Sea region “an integrated zone of ecological innovations and technologies”.

UNDP has been supporting the Government of Uzbekistan to strengthen this concept and identify opportunities than can help make this vision a reality.

The dramatic shrinking of the Aral Sea has created an ecological imbalance in the region; an imbalance that has reduced rainfall, increased aridity, aggravated ecosystem degradation, and dramatically reduced crop yields. Given that many people depend on agriculture for livelihoods, this has strong implications on income and poverty, and has been associated with growing numbers of youth migration. Biodiversity has also diminished – making living conditions extremely harsh for humans -- and even unviable for many other species.

UNDP is supporting Uzbekistan in addressing these complex challenges by taking an integrated approach – one that looks into systems design, data and analytics, alternative financing, knowledge and innovation, and integrated policies.

In the last two months, UNDP mobilized two missions with a multidisciplinary team covering the areas of water management, agriculture, rural development, innovation, climate change adaptation, economics and trade.  UNDP is exploring with the Government what are some of the key barriers to an integrated solution to the Aral Sea; what were limitations in previous attempts, and what may be some lessons learnt.

It means facilitating a platform to combine partners including the multilateral development banks and bilateral donors to provide more “joined-up” efforts. By aligning forces to act in a way that not only ensures partners are contributing creatively in specific areas, but that the individual contributions are greater than the sum of its parts.

Success is at reach. It has to be; as:

The courageous spirit of your ancestors is with you! When the great power of the people raged, (You did) have charmed the world(land)!

Thank you for your kind attention!