The land of milk and honey

“Beekeeping is more than just a job to me,” Kuralbay Nugmanov says at 55, holding his much labored-over honeycomb frames to light. “It’s my life.”

He is known among friends and neighbours as “Master Kuralbay”, a title he undoubtedly earned with his 30-year experience and specialized degree in bee-farming.

Kuralbay is one of many bee farmers from the Karakalpakstan region in Uzbekistan, a region close to the Aral Sea. With the environmental challenges brought on by the lake’s collapse, it has been a bumpy road for Kuralbay and nearby communities.

Until the 1960s, the Aral Sea was the world’s fourth largest inland sea.

Almost 80% of the people on the Aral Sea coast were involved in the production, processing and transportation of fish and fish products. Another 100,000 people raised livestock and poultry, and farmed agricultural crops.

The disappearance of the Aral Sea meant the collapse of marine ecosystems and loss of some six million hectares of arable land. Agriculture and bee farming suffered from lost productivity. Stretched plantation lands shrank, leaving fewer pollination fields for bees.

Such changes dealt a blow to the livelihoods of many living in the region. Many were forced to leave behind traditional, prosperous jobs. These hardships were particularly pronounced for the residents of the Karakalpakstan, one of the regions of Uzbekistan most devastated by the Aral Sea crisis.

It was clear that if the community were to survive on production, new sustainable methods and thinking would need to emerge.

That’s why UNDP and the Government of Turkey sought to give the farmers an opportunity to turn family beekeeping enterprises into larger facilities generating bigger profits.

It also set up a series of trainings for the farmers, from preventing pests to marketing their honey.

“We were having difficulties in wintering the bees, since our region’s climate is extremely unpredictable. But the trainings helped us with vital guidelines on how to preserve our beloved bees safely for the next spring season,” Kuralbay says.

The bee farmers have also set up an association, which serves as an informal hub of knowledge transfer: Bakhtiyar’s self-constructed hives, for example, have been a source of inspiration to his peers. But the association also gives the farmers a platform to market their products under a brand, creating a multiplier effect in the promotion of local goods. The association has served as a springboard for developing bee-farming, since more and more rural inhabitants are getting interested in starting a business.

Developing a culture of beekeeping in the region is only half the work. For the business to be profitable, and to see families through in the long-haul, the marketing aspect also needed some thought.

The initiative has set up two honey canning shops and one regional wax production workshop.

“The two canning shops mean that honey can be strained, refined and packaged to be sold nationally and potentially even internationally,” UNDP project manager Mr. Paluaniyazov explains. “Because it’s getting refined in one location, it means cost savings for the farmers and a more efficient workflow, too.”

The two canning shops can process more than 200 tons of honey annually, and the wax production has capacity to produce 36 tons of wax annually.

“Previously, I used to travel to the neighboring region, 400 km away, just to buy waxes and get my production canned. It was time-consuming and costly in terms of transportation,” says Bakhtiyar Menligiev. With the shop and workshops in his Nukus district, his life has gotten a lot easier.

Menligiev, 54, has been involved in bee-farming since 2014. In that time, he’s managed to increase his hives from four to 18, and now owns 3 hectares of horticulture land.

And the best part is that he gets to work with his family. His wife Menglieva Mehriban says that she likes to observe how bees work and live as one family. “They are not very different from us in that regard,” she laughs. Their children Sevinchay, 11, and Kuwanishbek, 10, love the fresh honey from the farm.

The benefits of beekeeping are not just economic. Its development in the region has a positive impact on the environment, too. The massive pollination of vegetables on the plots of the beekeepers and surrounding areas helps improve the biodiversity of the region, a much-needed relief after decades of drought and environmental uncertainty.

The tragedy of the Aral is unequivocally catastrophic, but the story of those who live in the region and their efforts to adapt to difficult conditions without losing hope is nothing short of inspiring. The sea may be gone, but the people, their hopes and dreams are here to stay. 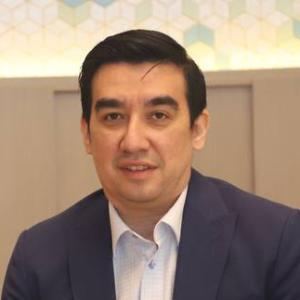