The UN Resident Coordinator in Uzbekistan

Ms. Asthana brings more than 25 years of experience in sustainable development to the position, which she has acquired while serving in leadership roles outside the United Nations at the international level. She was most recently posted as Development Director of the UK Foreign, Commonwealth and Development Office (FCDO) in China after occupying other senior positions at FCDO’s precursor, the UK Department for International Development (DFID). She has recently been leading the work of FCDO on recovering better together through clean and green infrastructure. At DFID, she was Deputy Head of Office and head of programmes and partnerships, strategy, results and communications in India. She also established and led DFID’s Asia regional programme and headed the Asia Directors’ office at the Asia Division.  She is a member of the UK Government Economic Service and has led the South Asia policy team; served as Africa regional growth adviser for the Africa Division and economic adviser for Middle East & North Africa.

Prior to her work in government services, Ms. Asthana has worked in academia and philanthropy.  She lectured at the London School of Economics (LSE) and the University of East Anglia in the UK and worked at research institutions in both India and the UK. She also makes time to support the work of non-government organizations working with women and underprivileged communities while mentoring young people through initiatives like the Schwarzman scholars’ programme at Tsinghua University, China.

She was born and grew up in India and is proud of her multicultural identity. 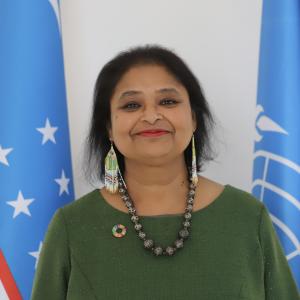