The Embassy of France and the UNCT in Uzbekistan jointly welcome the commitments to action on gender equality in Uzbekistan at the Generation Equality Forum that culminates in Paris from 30 June to 2 July 2021.

Gender equality is a priority for France feminist diplomacy. It is within this framework that the French President decided to co-organize, with Mexico and under the aegis of UN Women, the Generation Equality Forum, that takes place 26 years after the historic Beijing Declaration and Platform for Action on women's and girl’s rights.

The Paris Forum is a multi-actor and intergenerational gathering, a landmark global initiative, driving commitments that embed gender equality as a central component of Building Back Equal from COVID-19 and fuel significant and lasting change for generations to come. In a context where the pandemic threatens to reverse decades of progress on women's and girls' rights, the Generation Equality Forum aims to provide a concrete and ambitious response and to give a new positive impulse. The objective is to obtain, within 5 years, major progress on women's rights thanks to the impetus we all give together.

Mobilizing civil society worldwide, some 50 Heads of States, representatives from the private sector, public figures and other actors committed to gender equality issues, the Forum aims to set with represented countries new tangible, measurable and significant commitments that can lead to lasting and transformative change, and deliver concrete progress on gender equality across generations for girls and women.

We are delighted that the Government of Uzbekistan could join the Generation Equality Forum, become a commitment maker in one of the six action coalitions, and contribute to the Global Acceleration Plan that will be unveiled in Paris.

The Government of Uzbekistan along with civil society partners have joined two action coalitions: one on gender-based violence and another on economic justice and rights, and has made strong commitments, including financial commitments of USD 210 million, in both areas in line with the Government’s commitment to the National Sustainable Development Goals, particularly Goal 5: Achieve gender equality and empower women and girls.

At the Forum the Government of Uzbekistan, represented by Chairperson of the Senate of the Oliy Majlis of the Republic of Uzbekistan Mme Narbayeva, has, for example, committed:

- to allocate at least $ 40 million per year for the implementation of the National Gender Strategy, adopted by Parliament until 2030

- to support and fund service providers for survivors of violence (shelters, hotlines) that fully meet the needs of women and girls with disabilities

- that the country will also conduct, for the first time, a study to collect data and identify the causes of gender-based violence, early and forced marriages to develop effective policies and awareness raising campaigns to eradicate these human rights violations in the country

- to expand programs that create decent job opportunities for women, stimulate the transition from informal to formal employment, ensure equal pay for work of equal value, and expand access to social protection

- to continue promoting the participation of women in the Science, Technology, Engineering, and Mathematics (STEM) professions, including by expanding access to higher education in STEM fields for girls, as well as by combatting stereotypes, discrimination, and violence at work

- to explore the ratification of ILO Convention No.190 on the elimination of violence and harassment in the world of work by 2025, and its implementation in close partnership with the private sector

- to integrate sexual and reproductive health (SRH) services into universal health coverage. SRH programs will be aimed at providing women and men with full and equal access to high quality health services, as well as information and education in the area as well as high-quality and comprehensive family planning services

- that the Parliament will regularly review reports from the Government and invite representatives of civil society to monitor the implementation of the provisions of the Law "On the Protection of the Reproductive Health of Citizens", adopted in 2019

We are delighted to see that the Government and CSOs will form a partnership to implement these commitments. The ‘Unite’ NGO association with 70 members, consisting of grassroots civil society organizations and their regional branches across Uzbekistan working to promote and protect the rights of women and girls and gender equality, has in turn committed to support the Government in implementing its pledge in outreach, targeted services and assistance, monitoring of studies and work to change gender stereotypes.

The approach advocated by the French President is that of "multilateralism of actions". The UN Country Team in Uzbekistan is committed to continue providing full support to the efforts of the Government of Uzbekistan and civil society organizations to promote and take action for concrete change in gender equality, ensuring leaving no one behind and is ready to support the Government in translating these important commitments into action. 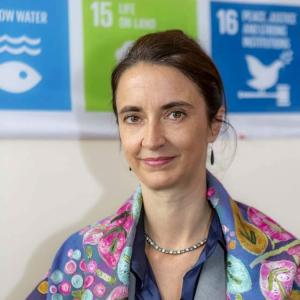